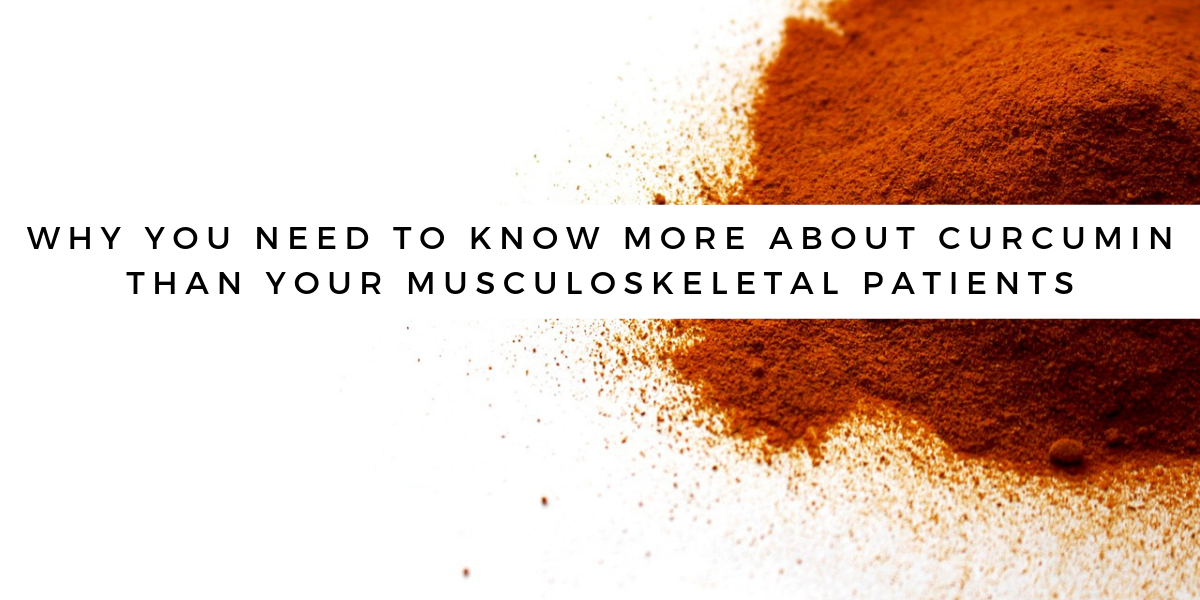 You’ve all seen it – the mile-long supplement list your patient brings in. Who knows what all those pills do, or if they need them? If your patient has musculoskeletal pain, curcumin is usually there. Does it work? Do they need it? Do they know something you don’t? You don’t want them being taken for a ride. You don’t want them burning a hole in their pocket for something that’s not going to work when you know the NSAIDs will. For all these reasons, you need to know more about curcumin than your musculoskeletal patients.

NSAIDs do work for inflammation, there’s no doubt about that. You’ve seen it time and time again in your clinic. But it’s possible to go wrong with NSAIDs.

If they’re started too early they can impede healing.

If they’re stayed on too long they can promote gastric ulcer. I’ve seen patients on long-term NSAIDs be put on a PPI (proton-pump inhibitor) to protect the stomach. (The patient thought it was to “line the stomach”, which is absolutely false, but that’s another story.) And the long-term effects of PPIs are horrible, including on the musculoskeletal system (bone loss and osteoporosis). Even short-term, NSAIDs increase intestinal permeability

Then there’s corticosteroid injections. No doubt you’ve seen them give your patients relief. But it’s equally likely you’ve had misgivings about potential long-term harm to joint healing and integrity with multiple steroid injections.

Not with curcumin. Curcumin targets several dozen inflammatory mediators to reduce inflammation. It also inhibits the “flicking of the switch” that sets off the entire inflammatory process: NF-KB. There’s nothing mincing about curcumin.

Your patients will have heard this, and have got a great deal on a jumbo, supersized curcumin from the bargain bin of their local chemist. And this is where you come in.

You have got to know more about curcumin than they do: why it works, how much they need, and – most importantly – the type to use to ensure they absorb it. Otherwise, curcumin is all very nice for the gut, but won’t necessarily reach your target – their joints.

It’s not hard to gain confidence in the ins and outs of using curcumin.  This, along with the pros and pitfalls of using fish oils and other “natural anti-inflammatories”, is covered in our self-paced e-course for clinicians, Nourished & Nimble: maximising musculoskeletal integrity for optimal patient outcomes.

The Urogenital Universe – Episode 1: Which vaginal estrogen product isn’t as good for lactobacilli

The Gut Digest – Ep. 2: How to reduce constipation in your patients taking iron